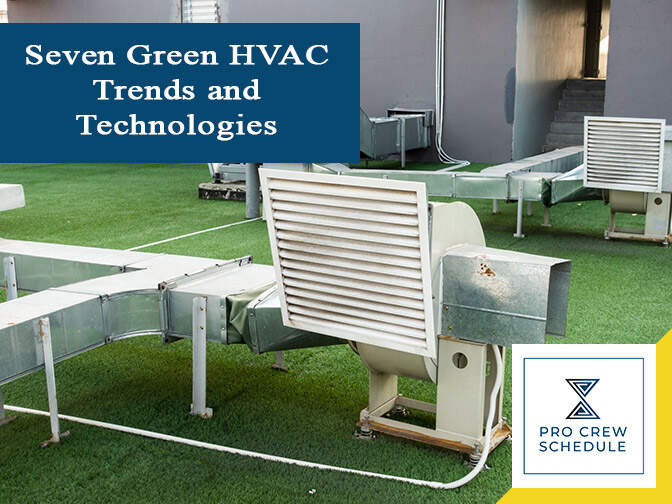 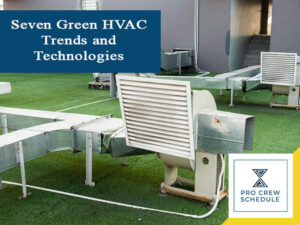 HVAC systems are one of the essential features in any building structure. When natural resources fail, these systems step up and provide comfort to the building’s occupants. Because comfort and safety is a priority in any indoor location, HVAC systems are frequently, if not always in use. Unfortunately, the continuous running of these systems harms the environment, regardless of how small. But with people’s creative minds, the innovation of today’s technology, and a highly efficient project management software, going green is becoming a prevalent practice, even in the construction and installment of HVAC systems.

While several people prefer traditional systems over modern ones, the number of people taking the green route increases. To aid in every project’s smooth progress, a subcontractor scheduling software is a useful tool. Project managers with multiple projects don’t have to worry about mixing up their crew members and subcontractors. They can track the entire project on a single platform and keep their people in line with a builder schedule.

What is Green HVAC?

Merely speaking, green HVAC systems are a step above traditional systems. With eco-friendly and advanced technologies, these new systems can reduce utility bills and efficiently use energy in almost any building type, industrial, commercial, or residential. With an effective construction schedule software, a green HVAC system’s installment can be completed without a hitch.

As pollution rates continue to rise, so do the number of people looking for ways to control that and replace that with a positive impact. One way to aid that cause is to go green with HVAC systems. Here are other ways a green HVAC system can help you.

a. Energy- and cost-efficient

In the US, heating and cooling use up 56% of energy in households, while they account for 73% of energy use in commercial buildings, according to the US Department of Energy. Naturally, that amount of energy translates to higher costs, especially with an inefficient or outdated HVAC system.

If people upgrade to more energy-efficient systems, they will reduce their utility bills by at least 20% while effectively heating and cooling the building.

Having smart HVAC systems installed can reduce drafts and stuffiness by producing fresher air. Some systems have a feature that can detect levels of carbon dioxide, a harmful gas. Once seen, the system will increase its production of cleaner air, resulting in stable comfort levels.

People today want things in an instant and with the least amount of effort. A smart HVAC system lets people regulate the building’s climate without having to control the thermostat physically. With just an app on their smartphones, they can remotely access and adjust the levels, even if they aren’t in the building.

Compared to other technological advancements, cooling and heating systems only have a small negative impact on the environment, but that does not mean it’s insignificant. About 50% of energy is used by air conditioning alone during the summer in the US. This can release almost 100 million tons of carbon dioxide. Plus, if they are using an older system that heavily relies on CFCs or HFCs, this can add more holes in the ozone layer the more that it’s in use.

So, switching to a more energy-efficient and eco-friendly system can significantly lessen one’s carbon footprint.

Many people think to harness solar power as the sun is an infinite source or sustainable and renewable energy when going green. However, many people now realize that the Earth also has a stable source of geothermal energy. No matter what region you are from, geothermal HVAC systems are possible to install because temperatures deep underground stay the same.

The way geothermal HVAC systems work is that they get their power from deep within the Earth. With an electrically-powered heat pump, fluid (usually water or refrigerant) is cycled through loops of pipes underground. Here, heat transfers from the ambient air inside the building to the ground and cycles through.

During colder days when the heating mode is on, the pump processes the fluid through pipes in hotter areas to increase the fluid’s temperature, then back to the building. After this, a heat exchanger transfers the heat from the liquid to the building’s air via the building’s indoor heating system.

On the other hand, when the cooling mode is on for warmer seasons, the process is somehow reversed with the fluid absorbing heat from the air and releasing it into the ground. In this method, the building cools down by the pumps constantly removing the heat from the air inside.

Ice isn’t just great for cooling drinks and alleviates the swelling. Ice Energy has developed a system, called the Ice Bear system, that can make air conditioning units run on ice. The simple explanation of the process is that the system turns water to ice that cools the building’s inside.

For a more in-depth understanding: At night, the Ice Bear cooling unit cycles a refrigerant through copper coils to freeze about 450 gallons of water. Once the water around the coils turns to ice, it’s stored for the next day’s use. So when the time comes that temperatures are rising, the AC unit powers down, letting the ice cool the refrigerant, and keeping the indoor climate nice and comfortable.

With this cooling system, the building’s overall energy usage can be cut down by about 30%

Smart thermostats have been around for a while and are more than just practicality and ease of controlling. With just a mobile app, people can control the building’s climate, saving money and energy. They can even have access to it remotely, which lets them control it even if they are not on the property.

In addition to that, with today’s latest technology, there are some smart thermostats that have additional features. Some can turn units off or on when detecting people in a room to save energy. In contrast, others can monitor energy use and learn the building’s habits, automatically adjusting to the preferred settings.

Biodiesel is an excellent alternative to power cars, but this renewable and clean-burning fuel can also be a cleaner way to run HVAC systems.

Alternatively, the burning of fossil fuel releases ample amounts of greenhouse gases that contribute to ozone depletion. On the flip side, there are fewer air pollutants and harmful gases released when burning biofuels, lessening heat-trapping gases.

One other great thing about biodiesel is that it is sustainable because it is produced from “energy crops” like sugarcane, corn, wheat, and soybeans.

Coal is one of the leading sources of noxious greenhouses gases, like sulfur and nitrogen oxide. But today’s scientists have found a way to burn coal cleanly through the process of gasification. Here, the carbon in coal is used to remove the oxygen from water, producing hydrogen gas for fuel. The gas can now be used to power a turbine to produce electricity. Additionally, emissions from this process are pumped underground, and the other pollutants are solidified to be burned.

With that, green coal is an excellent power-generator for HVAC systems to avoid traditional processes that could adversely affect the environment.

Traditionally, heating or cooling units are controlled by a single thermostat. The effect of the unified heating and cooling of rooms is a waste of energy. But with zoned systems, multiple thermostats can control the climate for each room. This can save money and power because rooms with a comfortable temperature have the units switched off, while areas that need more heat or cooling can have them switched on. Today, more and more zoned HVAC systems come with smart thermostats, allowing it to be controlled remotely.

Chromasun has created thermally-driven AC systems that are solar-powered and can be supplemented by cheap natural gas. An efficient alternative to traditional units, Chromasun has its own solar panels that can generate temperature high enough to power a double-effect chiller, the company’s most effective system. According to the company, the double-chiller system has more cooling power than many PV systems and can eliminate electricity costs.

As the world continues to get polluted and destroyed, it also progresses towards technological advancements that can save it. Because HVAC systems are widespread and are frequently in use, it makes sense that more and more people are choosing to have green systems installed in their homes and buildings. And with the continuous addition of new environmentally-friendly methods and techniques, there are more opportunities for people to save energy, money, and the Earth.

Who should use Pro Crew Schedule?

PrevPreviousTiles vs. Panels: The Pros and Cons of Solar Roofing
NextIntroducing the Top 4 Project Delivery Methods Implemented in ConstructionNext